A Story About Not Quitting 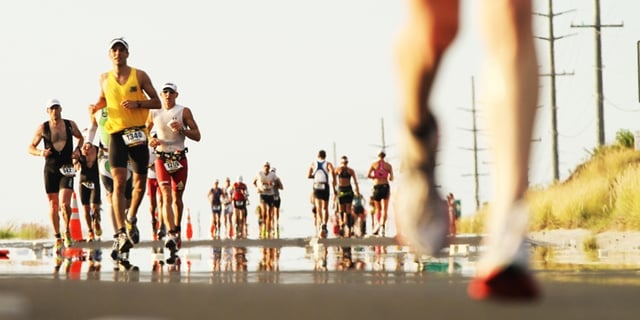 Last week, I ran as part of a marathon relay team in the Baltimore Running Festival.  While casually sitting at a pre-race dinner party with the other runners, my friends and I shared some stories about past running races and, like most other times, we did our best to keep our little embellishments at a minimum as we spoke of past events we’d done and ways that we’d battled to cross some silly finish line.

Jim is a slightly crusty, white-haired, 58 year-old dude with a resting heart rate of about 20 beats per minute. Jim told us of an Iron Man race he’d done two years earlier during which he battled: a post-surgery shoulder injury, severe dehydration (the race organizers ran out of water during portions of the course), heat exhaustion, and finally, a mini-stroke.

As Jim told our table about the race, one part stood out to me as remarkable, if not inhuman (or maybe it was fully human – I’ve yet to decide.):  He had blacked-out during the 112-mile bike part of the race and had all but convinced himself he couldn’t go on.  And yet, somehow, he did.  He ran for 26 miles after that, passing by parked ambulance after parked ambulance on the race course as the miles ticked by in the afternoon heat (He even told us about these internal dialogues he had as he would pass an ambulance: "...Hey, look, that ambulance door is open. Maybe I should get in..." "Nah, you can catch the one at the next medical station...").

His story of perseverance was so remarkable, so amazing, that my “Hey, I ran a full marathon one time!” story seemed to just dangle in a weak breeze by comparison.  The cool thing about Jim was that he wasn’t being braggadocios about his accomplishment.  He was just telling us a story about how a soul and a mind can endure.

So, there we are around the dinner table. All eyes are on Jim as he finishes his story. Almost all of our jaws hang slightly if not totally open. And then Jason (Rewire President and partner in this venture) asks him, “what was it in you that made you go on?”

Jim cocked his head and then looked around the table as if he didn’t fully understand the question. As if everyone at the table had just asked him what the number 8 tastes like.  And after a moment of silence he simply replied, “You know… you just never quit.”

If you are reading this, my guess is that you have no such tale to tell.  I am not even saying what Jim did to finish that race is in any way advisable for others.  I suppose I share it with you because every one of us has something in our lives that begs us to quit.  It may not be some crazy race, it may just be a simple habit change or a discipline or sacrifice you are going through.

The human mind and its mystical spirit have an uncanny capacity to not quit.

What is it today that you need to stick with?  I assure you that you possess an unquenchable reservoir to do just that.

Cheers to those times when we simply do not quit!