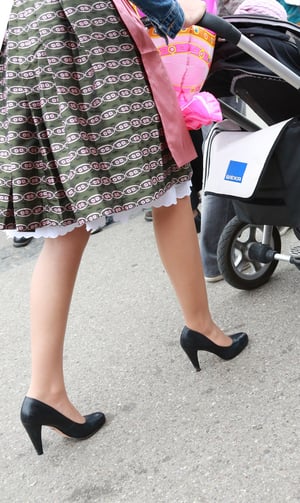 The whole debacle might have been prevented if I (think Lucille Ball) had not listened to my doctor husband (think Desi Arnez) who insisted that our two-year-old daughter’s hand-mouth disease was gone and that she was perfectly fine going to daycare the next morning. If I hadn’t listened, I would have had a fighting chance of getting a babysitter the night before.

Instead, my daughter woke up in the morning with a new round of white things all over her tongue and I needed to find child care in order for me to teach a class and hold office hours at the university. I jumped on the phone and began dialing. No one was available… until finally I reached a woman who barely spoke English. “Yes, I be there soon,” she said and I was relieved.

An hour later when she hadn’t arrived, I realized that apparently there had been some mix-up.

Class was starting soon. There was only one option now. I grabbed some toys and snacks and threw them in the diaper bag, put my daughter and the stroller in the minivan, and hit the road. College students are tough. They don’t wait around for teachers. If I wasn’t there on time, they’d leave and we’d be behind one lecture before the next midterm exam. I drove through the streets contemplating short cuts all the way before finally arriving at the parking garage at exactly seven minutes before class was to start. The walk from the garage to the classroom was at least 10 minutes. So, naturally, I began to run.

While pushing a cheap stroller.

And carrying a briefcase and diaper bag.

Along the way there were a few mishaps -- like the cut-through I took which wasn’t a cut-through and required backtracking -- but eventually we arrived at the building.

When the building’s elevator, moving at the speed of continental drift, finally let us out on the second floor, I was dripping with sweat even though it was April... in Cleveland.

I had made it. For one millisecond I was relieved. Then I saw my 35 students who were supposed to sitting in their seats in the classroom instead standing in the hallway. “The doors are locked,” one of them said as she looked me up and down, taking in the stroller and the toddler in it.

Of all of the hundreds of times I’ve arrived to teach a class, I've never before or since been locked out of a room. What are you supposed to do, I wondered, still trying to catch my breath. Then a maintenance guy walked by. But he didn’t have a key. Instead he directed me to the Dean’s office on the fifth floor.

To cut to the end, I got the key, unlocked the door, spread some toys on the floor and some snacks, and began to teach. My daughter, freaked out by thirty five pairs of eyes trained on her and her Shirley Temple blond curls of cuteness, ignored the toys and hid behind my back. After that, all was fine and class proceeded.

Until the zipper on the back of my skirt grabbed her attention.

Sometimes work-life balance plays out like an episode of I Love Lucy.