How a 25-Year-Old Bicycle Can Help You Start Now 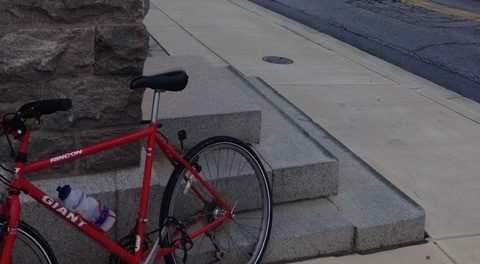 In the fall of 1992, an enthusiastic, bright student bought a raffle ticket at a college fundraiser for a mission trip to Mexico that she would be involved with that December. She had never won a raffle before and didn’t think of herself as especially lucky, but this was for a good cause, “So why not buy a ticket?” she thought.

But then she won!

It was a Giant Rincon hybrid mountain bike worth over $500! (Remember, this was 1992.) And although this college senior was active, she wasn’t really into cycling and had no need for the bike. So that night she gave the bike to her boyfriend as a gift.

Lucky me, I was that boyfriend! And, in case you’re wondering, the answer is “yes.” I was smart enough to make that particular college senior my wife. But that’s another story for another article. Back to the bike.

That bike has seen many mountain biking trails, beaches, and roads over the years, but it has sat in our garage mostly idle for the last several years collecting dust and rust. The tires got old and brittle; the brakes were worn down and the chain and gearing were all pretty banged up. We weren’t going to give it to charity or toss it out because it’s such a cool part of my family’s story, but it’s just been sitting in our garage for a decade or so.

But then a skiing accident in Colorado this winter put the kibosh on my spring running plans. I knew I would need another physical activity to replace running, but was not exactly sure which one. On the same ski trip, a friend was telling the group how he commutes to work via his bicycle most days during the week in the spring and summer months. I did not think much about that conversation until the plane ride home when it really sunk in that I was not going to be running any time soon (an MRI confirmed that my leg was not broken, but my calf did suffer a grade 2 contusion) and if I was going to stay active (which is important to me), I would need to find another activity soon. The internal conversation went something like…

What if I ride a bike to work, I wonder if my calf could handle that?  Oh, but I don’t really own a bike…. Wait, yes I do, but I think that bike is 20-something years old. That’s gotta be, like, 90 in bike years. That will never work…. I could buy a bike. But a good bike is at least $1,000 or something. And I think it’s at least 20 miles from my house to the office. That’s a very long way. Bah! Never mind….

Yes, I really did think all that. In a matter of about 15 seconds, I thought of riding a bike and then dismissed the idea that quickly, telling myself all the reasons it wouldn't work. Talk about an active lizard brain! But when I pulled into the garage that evening from the airport, I took a look at that 25-year-old bike and decided that maybe, with a little TLC, it might be good for a few more rides. Later that week, I hauled the bike to our local bike shop where they slapped some new tires on it and gave it a quickie tune up. I certainly did not have the latest and greatest cycling equipment and I was not sure about the exact route I would take to get to work, but I kept on. I did enough on Google Maps to figure out that it was not nearly 20 miles to the office. It was only 8 miles and gosh, maybe I could handle an 8-mile bike ride. So a few weeks later on a Monday, there I was, pedaling that 25-year-old gift from my college sweetheart into the office.

And you know what? It was not a perfect route, it was not on a perfect bike, and I still have a LOT to learn about commuting as a cyclist. And, yes, I was extremely tired by the end of the ride. But I had a new activity under my belt and was feeling pretty good about myself and the accomplishment of starting something new.

I started. And now that I have started this new biking to work deal, figuring out improvements and other tricks along the way is not nearly as hard as it all seemed on that plane ride home from Colorado.

And that right there is my message to you today: If there is something that you are looking to start — and let’s face it, we all have something that we want to start — please start it now. You want to lose weight or commit to a new sales discipline or start a new hobby or finally get it right with your boss or your son or you mother or… you get my point. Let me assure you that the conditions will never, ever, EVER be completely perfect for you to start that thing that you want to start. Do not wait until the timing or the conditions or the whatever is just right. Just start anyway.

Do you have a story about something that you recently started or know you need to start? Let us know.